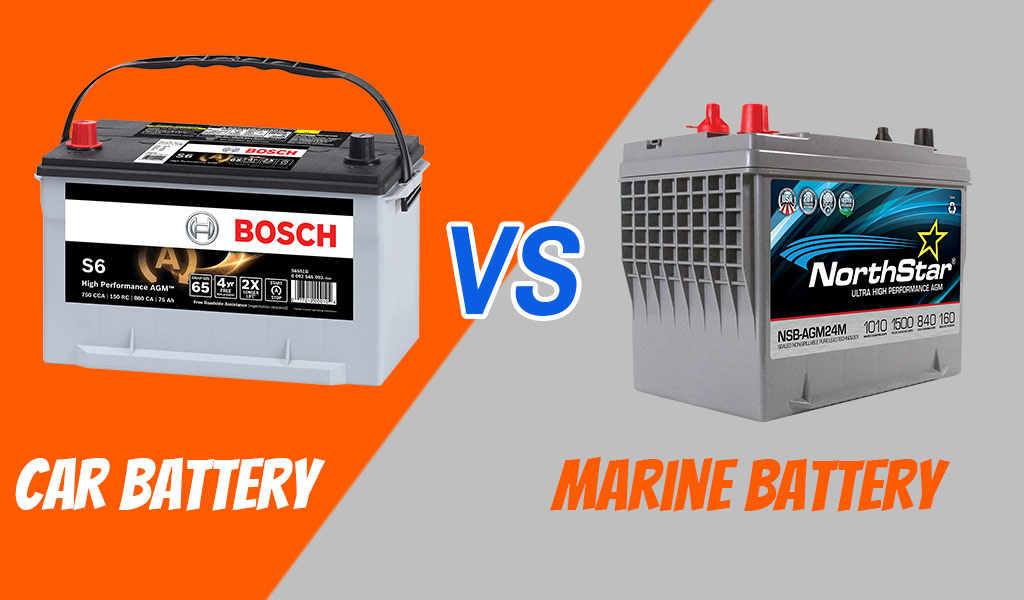 Though car battery and marine battery both are flood-acid categories, they have significantly different in all areas. In fact, you can't use a car battery instead of using a marine battery. It'll bring a huge loss in the aspects of money, time and other resources.

So, you'll know the key differences between the car battery and the marine battery for the use of in a car and a boat respectively.

The key differences between Car Battery and the marine Battery

Though both car battery and marine battery use lead plates and sulphuric acid as substances, they have crucial differences. Here they are:

On the other hand, marine batteries need to deliver continuous power to remain the boat’s electronic system active. So, the plates are made of thick plates. Also, they are built with thick and robust plastic. The top quality materials help them to last longer and provide better insulate against vibration and impact.

Furthermore, marine batteries have to go on more stringent condition than the car batteries. Don't you think the ocean is more challenging than the highway? So, the robust and thick plastic materials of the marine batteries ensure a long lifespan.

Providing proper voltage is the ultimate goal of the batteries. So, it's no matter which battery you use, and the battery should provide the required power to accomplish the task. Here, the power is measured through voltage and obviously different units are used for various sources.

Though both batteries are made from lead acidic substances, they have fundamental and specific purposes to accomplish. Also, they play a different role in the electrical ecosystem.

For example, car batteries are designed and made such a way that can deliver enough amperage within the shortest possible time. It helps to turn over the gasoline or diesel without regarding the outside temperature. So, the vehicles can alternate the charge and run.

Cautionary handling is a crucial part for any electrical equipment. As lead plates and acid substances are dangerous, they should be carefully handled. However, between the batteries as mentioned above, which is the most dangerous and requires special attention?

The car batteries are comparatively less-weighted and contain less amount of acid substances. So, it seems that car batteries are less dangerous. But remember that, thin lead plates may bring any explosive hazard due to unconscious handling.

Additionally, marine batteries are more potent than car batteries. They have much more acid substances and the capacity to produce electricity. So, they are more dangerous than the tiny car batteries. Also, they are used in the mid of the ocean where emergency aid may not be available. So, always pay special attention when you use lead-acid batteries.

Finally, never try using a car battery for your boat instead of using a marine battery. It may occur dangerous hazards.